We took off on time on 21st of November from Zurich, had our flight via Madrid and Santiago de Chile and finally arrived in Mendoza, the wine capital of Argentina, one day later. Flying the new Boeing Dreamliner was nice, but after so many hours (14 h) in a plane, it's always nice to get out of it. During the flight to Mendoza, we have already been able to see the mountain we want to climb, the 6962 m high Aconcagua.

The first days in Mendoza were to relax from the long trip and to get ready for the next days. After a traditional goat dinner, we took the bus to arrive in Uspallata, a town in the pre-Andes in 1850 m altitude to begin our own acclimatisation process. 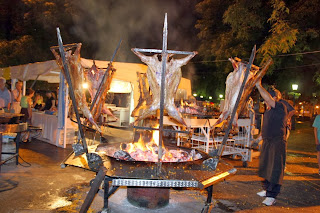 Although the tourist information does not know so much about hiking trails in the surroundings, we have been able to find at least some paths that we could walk and we also hired bycicles to see the "cerro 7 colores", a mountain with differently colored stones. 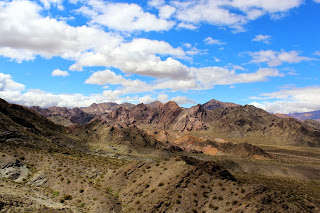 But since we are aiming to climb the highest mountain in America, Uspallata is just the first stop. We headed further up the mountains to arrive in Las Cuevas, a town that basically exsists of some restaurants, hostels and a border station on 3200 m above sea level. This was our base for 2 day-trips in the surrounding mountains. We stayed in a small hostel and we were the only guests there, so it was quite private and nice. Las Cuevas was once important because of the train that connected Argentina with Chile, but there is no trains anymore and tracks are falling appart. 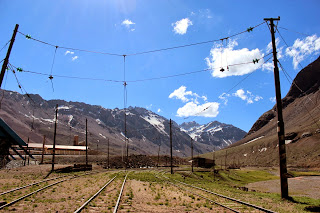 When we arrived, we also had a quick look at Aconcagua and we got an impression, how cold it can be up here. It was snowing slightly and there was a very strong wind so that standing at one point was sometimes a challenge.
Nevertheless, we decided to hike up to the "Christo el redentor" which is the old pass between the two countries. The way was slighthly worse we expected, but we managed to reach the 3860 m pass between Argentina and Chile. From this point we had a wonderfull view over the valleys here and luckily the weather started to become nicer. The wind was still blowing, but the sun was shining and the temperature was ok. After descending, we prepared our dinner (pasta) and had a lot of tea to keep us warm since in the night, the temperature was still dropping below 0 degrees and the hostel was not good isolated. 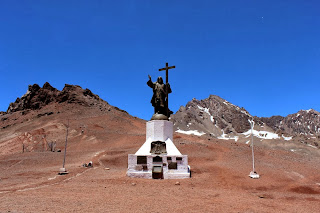 Our second trip was a hike along the las cuevas river in a valley where nobody else is. The wind made it a fresh day but the temperature was now more comfortable. Once we arrived in our hostel, another person was taking care of the hostel. Pablo is a guide for the Aconcagua so we talked with him about how it can be on the mountain itself. It was a very enjoyable evening, our last night in Las Cuevas. 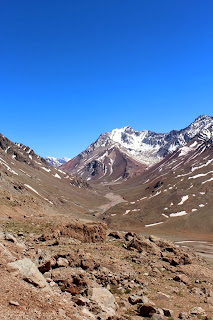 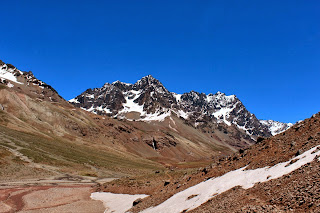 Next morning, we were heading back to Mendoza to meet up with our group and our tour guide Ilan. Although our friends had some problems due to delayed flights, we finally managed to meet up and have dinner together.

Saturday was then the day for arranging things in Mendoza, like renting our missing equipement and getting the permission for the park, which costs 5000 Pesos per Person (about 700 US$). Once we had done all this, we were ready for some (more) meat and wine and this morning, we left Mendoza again direction Uspallata. It will be our last evening in a hotel since we will start hiking tomorrow. If everything goes well, we shall be standing on the summit around the 12th of December, but we'll see.


To keep track of us, we have our tracking device which we try to use here as well. We hope to have good weather, which is the key for a successfull summit day.

Next update will be once we are back from our trip.