After the aclimatization trip, we arrived in Mendoza savely and checked into our nice hotel where we awaited the arrival of the tour guide and the other two swiss guys. They have missed their flights in Santiago de Chile so we had to wait some hours. Fortunately, they made their way and we met Ilan our local guide.

Besides guiding, he was also in charge of organizing the rest of the trip and to get Argentine money, he called his friend to do some money exchange. Since the peso is losing a lot of value, they are happy to by dollars and Euros to a very nice exchange rate (Official: 6.5 ; in Restaurants 8.5, "Dollar Blue" 10.0 USD). So, a nice men enteres the hotel you lead him to your room, where you first place the dollars / Euros and he provides the matching amount in Peso. Everyone is happy after the trade...

Getting the permit is another story the next day: first, you need 5'000 Peso in Cash (depending on the rate above, this is more or less) and your passport and a piece of paper Ilan filled out. With this, you walk down the road to get to a "rapi-pago" place where you cash in the 5'000 Peso and get a receipt. With this receipt, you head to the main office of the parque Aconcagua, sign some papers and receive finally your permit.

Before leaving, we rented the missing equipements (e.g. special boots that look like skying boots) and we had a nice piece of meat before going to bed. Next day, we headed to Uspallata (a place where the movie "7 years in Tibet" was shot) and stayed on night there in a big hotel that, to our bad luck, was hosting about 100 old age pensioner (German: Typische Kaffeefahrt Gäste) that were having a party in this hotel (luckily only till midnight). Leaving the place in the morning, we continued to drive up to 2400 m altitude to start our hike at punta de Vacas (well, we did not see a single cow.... they must have been eaten by the other hikers before)! A nice hike along a river to our first night in tents (YEAH! Camping!!) at pampa de lenas. Instead of "punta de vacas" we suggest to rename the start to "punta de mulas" since we have seen quite a lot of them. They are used to bring our luggage and food, etc. to the camp sites.

Once we arrived after a dusty hike (we were all covered in dust at the end), we cleand us off the dirt and had a very tasty gaucho BBQ! Happy and full, we slept on 2800 m in the tent and our sleeping bags. It was just after midnight, when we heared some mulas (donkeys) running through our camp and the gauchos shouting and following them, but besides this, it was all allright!

The second day lead us to casa de piedra (a matching name) and we could see the mountain now for the first time. This day was also a very dusty and dry day and in the evening, we had a special dish: Pollo al disco. This is not a dancing chick, it's acually a tasty dinner with chicken with vegetables and potatoes in a beer sauce.... good work at 3200 m altitude!
Third day: Yes, still dusty but now, our way started to become steeper to base camp. During the season, some people live in base camp to make and serve food for the people wanting to climb Aconcagua (4 month full time). We all felt good and our plan was to stay some days in basecamp to get aclimatized to the altitude (4'200 m). Sleeping in tents became not so bad anymore since we could leave them set up for some days. 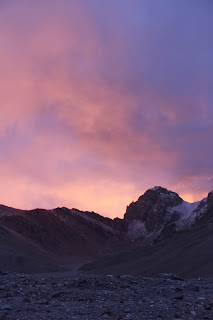 Day 4: Resting day. Medical check to see if we are aclimatized already to this altitude. All of us passed :-) . Not moving too quickly, drinking tea, reading, waiting for dinner.

Day 5: A little correctiton: sleeping in a tent is definitely not fun if a winterstorm is rushing through the camp. Snow and wind kept us up all night.... but we still had to do some aclimatization hikes, so we climbed "cerro Collorado" next to the camp.Fortunately, the sun was out and melted away the snow quickly.


Day 6: Hiking up to campo 1 (5'000 m ) and down again. What a fun! Once you arrive, you know that you have to do the same thing tomorrow again :-) but the view and the weather was nice, so it was quite enjoyable.


Day 7: Winter is back. Although, it is summer in Argentina, we had snow down to base camp. But this can not stop though swiss hikers from climbing to camp 1 again. Fighting throught the snow storm, we finally arrived in campo 1 tired and wet. Due to the winds, we just had 2 tents for 5 people, so the night was short and windy, but not too cold (with 3 people in the same tent). All other tours returned in between to base camp for better weather. We had soup and luck, then in the morning, the sun was out again and melted most of the snow away.

Day 8: No time for resting: Today, we hike to campo 2 for aclimatization. The first few hours, you stand in a wall and fight against the snow, but once you reache the edge, you have a splendid view to the other mountains. Most of them are not higher than the point we reached (about 5'400 m) and the view was splendid. On the way down, we noticed, that a stone man was watching us all day!

Day 9: We are getting closer to the summit. Taking down our tents (Peter actually slept outside of the tent this time in 5'000 m altitude) and hiking up the wall again. Luckily, other groups have built a nice path through the snow, so it is less tiring to get to camp 2 (5'500 m). In camp 2, we get interviewed by an Pakistany, that want's to do the 7 summits in 7 months. Furthermore, he's doing a documentation about climbers, so we are now part of the Pakistany project. His sister seems to be the first pakistany woman who climbed Mt. Everest... Strange people up here... :-)

Day 10: The weatherforecast seems to be good and we are in a pretty good condition as well. So, we pack our stuff and hike up to campo 3 on 6'000 m. At the beginning a steep hike, becoming better after a while. And the tension is rising. If everything works as planned, we'll try to climb the montain the next morning. So, we go early to bed (but taking some pictures before) to be ready for the day.

Day 11: around 04.30 we get up to be ready at 06.00 to start our summit day. The weather is good and we hike about 3 hours before we reach the refugio Independencia on 6'400 m, a shelter hut. By this time, we are higher than all other mountains around us!

Besides our guide Ilan, another guide / porter is with us, Hugo. Unfortunately, the group get's split into two and we get Hugo as our lead.... well, we have seen better guiding. Instead leading in a constant pace (as Ilan did) he goes fast and slow in cycles... so the way up to the next place for a break becomes very difficult. Nevertheless, we made it up to "las cuevas" a good place for a break. Unfortunately, the weather turns to it's bad side: snow and wind and fog are now all over the place.Not the best conditions for hiking up such a tall mountain, but we keep going.

At about 6'800 m the weather is still bad (even worse) and the guiding not better. After a break, we decide to prefere to have a save descend rather than trying to reach the summit. So, we won't make it to the top, but the view is anyway not good (so no panorama pictures) and a safe descend is important!

The way down is much quicker and we arrive around 18.00 campo 3 again, where we stay one more night.


Day 12: Hiking down the other side of the mountain to Plaza de Mulas, the other base camp. It's a short but step section we have to hike down. Fourtunately, down in this base camp, we meet Pablo. He's the organzier down there and we get very delicious pizza and meat for dinner.

As in some airports, our luggage did not make it down the mountain on time, but some other sleeping bags were quickly organized and we could sleep in a fixed tent with beds instead of our tents!

Last day on the mountain: Snoring people suck! a guy was making a lot of noise during the night so we did not sleep much but we have to hike out of the park today. 27 km downhill is the plan, the sun is out again and we can feel the last days now. It is more a duty then a joy doing this, but it has to be. Finally, we arrive the entrance, see some condors and check out. With a coold beer, we do a short touristic stop at the "Puente del Inca" and drive back to Mendoza that day. A very strange thing happend: it started to rain on the way and even in Mendoza we had rain; it does not rain very often down there! But now, it's time for a good steak and some more red wine now! Furthermore, I should think of visiting a barber.... I do lok like a Taliban now. I guess I would have problems entering Switzerland how I look right now! 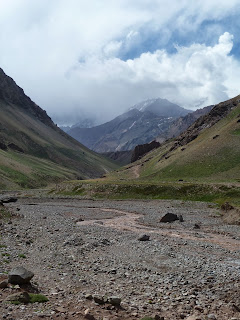 The next days we spend with relaxing and washing our cloths. Some of them, we'll need to bring to the laundry again, everything is so dusty and dirty! Meat is given for the evening and we did 2 wine tours in Maipu (NO!! Mr. Hugo rental bikes was closed due to mourning, so we just got some crappy other bikes) and another with a car in Lujan de Cuyo. The last stop there was amazing (not because we have had too many drinks before, but they had the best wine of all the stops this day). Perfect sweet wine from white and red grapes; delicious! And in terms of meat: have a look down here: 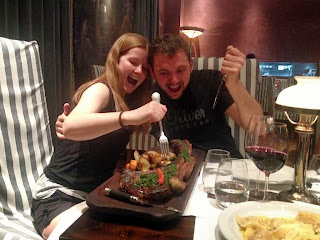 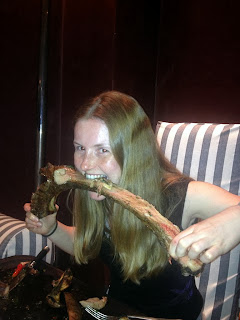 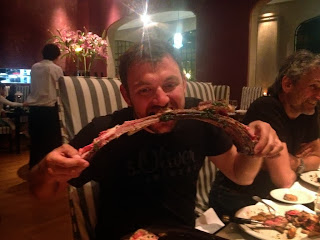 After this, it was time to say goodbye to Mendoza, heading south to Neuquen (about 13 hours bus ride). Our hiking friends (René and Peter) catched they plane back to Switzerland and we are looking forward to seeing something new and head to Patagonia!!